Total heaven! - another exhibition of impressionism at the Met Museum! 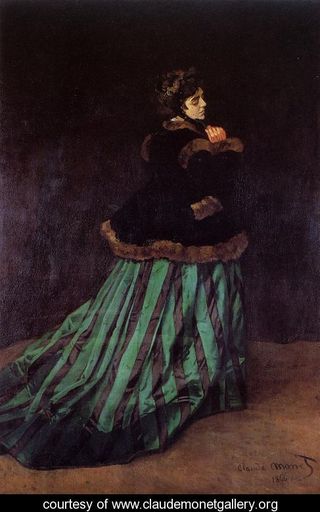 Camille or The Green Dress by the 25-year-old Claude Monet
My friend Kimberly and I took the cross town bus in NYC on Saturday night and in fifteen minutes, were standing at the entrance of the amazing exhibition "Impressionism, Fashion, and Modernity" at the Metropolitan Museum of Art. And the very first painting we saw was Monet's painting of Camille when she was nineteen in a borrowed green and black walking dress; I never saw the original as it hangs normally in a museum in Bremen.

(The Met opened in 1872, seven years after this painting was created.)

There were also several other original paintings borrowed from other museums of Camille...plus dress reproductions, parasols, fans, cosmetic boxes, prints from contemporary magazines. Also many works by Renoir, Manet, Tissot, Morisot and Cassatt. Total heaven! To quote the museum site, the exhibition "presents a revealing look at the role of fashion in the works of the Impressionists and their contemporaries. Some eighty major figure paintings, seen in concert with period costumes, accessories, fashion plates, photographs, and popular prints, highlight the vital relationship between fashion and art during the pivotal years, from the mid-1860s to the mid-1880s, when Paris emerged as the style capital of the world. "

I noticed Claude's signature on the painting: his first name is small and MONET is scrawled bigger with the "T" at the end larger than any other letter as if he would say, "There! I'm done! Isn't she lovely?"

We celebrated after with glasses of wine in the museum's balcony bar which is just about as expensive as wine in Piazza San Marco, but it was a heavenly end to the evening.

Go if you can! I felt as if I walked into a page of my own novel! You have through May 27th!
2 Comments

A magical moment in time I will never forget!

It was a pleasant surprise to open my mail and see your book Claude & Camille--which I've skimmed but will enjoy
reading more leisurely when the exhibition Impressionism, Fashion, and Modernity is up and running here.

Congratulations on this achievement and thank you again for having thought of us.

p.s. May I suggest for your future reading about this dynamic duo Mary Gedo's Monet and his Muse.
http://www.amazon.com/Monet-His-Muse-Camille-Artists/dp/0226284808