a guest blog from the author of A VIOLET SEASON, New York State 1898 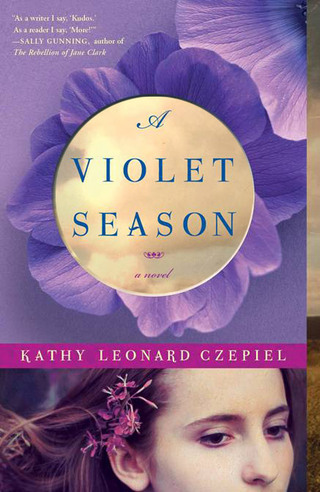 NOTE ABOUT MY GUEST AUTHOR:

This rainy and pre-hurricane day in NYC, I want to extend a warm welcome to Kathy Leonard Czepiel, the author of A Violet Season, a historical novel set on a Hudson Valley violet farm on the eve of the twentieth century. I found her book the old-fashioned way: browsing in a book shop! Kathy is the recipient of a 2012 creative writing fellowship from the National Endowment for the Arts, and her short fiction has appeared in numerous literary journals including Cimarron Review, Indiana Review, CALYX, Confrontation, and The Pinch. Czepiel teaches in the First-Year Writing Program at Quinnipiac University in Connecticut, where she lives with her husband and their two daughters. Learn more about Czepiel and her work at her website, http://kathyleonardczepiel.com.

Historical novels are funny animals. They are novels, so they require what all novels require: a well-crafted plot, interesting characters, the right pacing and movement from chapter to chapter, from scene to summary and back again, and some overarching thematic glue (often the last thing the author becomes aware of). Historical novels also tend to focus on a particular person or event from history about which the author needs to know a great deal. In my case, I had to learn everything I could about the violet-growing industry of the late nineteenth and early twentieth centuries in the mid-Hudson Valley of New York State. That industry had all but disappeared by the time I was growing up there, and my fascination about what had been lost was the seed of my novel, A Violet Season.

But it’s the hidden research that sets historical novels apart from other kinds of fiction. The historical novelist must also learn about the simple details of everyday life, and then seamlessly weave them into the fabric of the story so they will hardly be noticed at all. The aim is not for the reader to step back from the story and say, “Aha! So that’s how they churned butter,” but rather for readers to be carried along on those details and so utterly convinced by them that they believe they have entered an earlier, different world.

What does it feel like to sleep on a rope bed? What does coal sound like falling into a hod? How did women hook the buttons on their shoes? What does milk taste like on the farm, straight from the cow? How formally might a boy address his sweetheart in a letter? What were the sidewalks made of? and so on. These are details the historical novelist doesn’t necessarily want to draw attention to, but they must be in the story, and they must be right, because I promise you, someone will notice if we get them wrong!

I undertook this kind of research in an ongoing and piecemeal way as I worked on the drafts of my novel. Some of this information can be found in recent sources like history texts and websites, but much of it comes from going back to the primary documents of the past. While I was writing, I read fiction written around the turn of the century to get the idiom right. From Theodore Dreiser’s Sister Carrie I picked up common phrases of the time—“she’s a daisy,” “all the rage,” “swell”—and was reminded of some businesses I might have overlooked: furriers, haberdashers, confectioners. In Stephen Crane’s Maggie, a Girl of the Streets there was street slang—“dope it out,” “doing me dirt,” and the familiar “what the hell”—as well as rich details: imitation leather wallpaper in a saloon, a nickel-plated cash register. Non-fiction of the time is also extremely useful. From Dorothy Richardson’s The Long Day: The Story of a New York Working Girl, I learned, among other things, that girls working in a box factory turned their skirts inside out so the glue stains would be on the underside of their skirts. Jacob Riis’s famous study How the Other Half Lives was full of useful photographs of New York City’s Lower East Side at that time, as well as an 1899 map that I followed on my own research trips to New York to get a better feel for the old neighborhood. A facsimile of the 1897 Sears-Roebuck catalog was a treasure trove of drawings of everything my characters might have purchased, and for how much. Whenever I could, I got my hands on the real items in order to describe them better, and when I couldn’t, I asked someone who had, like the woman who sews on a collection of antique sewing machines and who described for me the feel of the treadle beneath her feet and the sounds of the shuttle and flywheel.

In some ways, this kind of research is the most time-consuming. For certain, it is the least efficient. A writer might spend hours sifting through sources like these for a reference that, in the novel, passes in a few words. But historical fiction is nothing without these details. It’s one of the reasons, I think, that readers are drawn to this genre—not so much to learn what life was like in a certain time or place, but to actually feel as if they’ve visited.