"I'm late!" said the White Rabbit (and the author) 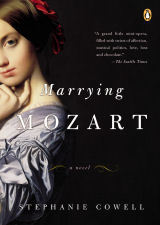 the little book soon to be an opera!

...."I'm late." Which is what I seem to be these days but at least I am moving ahead in several areas. We are preparing my first two novels (NICHOLAS COOKE and THE PHYSICIAN OF LONDON) as e-books which is taking some time as they must be scanned (no electronic copies available) and proofed etc. so the first one will be available by the end of August. The two books got marvelous reviews and the second won the American Book Award. And finally I am spending serious hours on pulling the draft of the concluding book of the trilogy together. I have been working on it in bits over the years but I think this is the time for it to flower.

The latest and I hope final draft of the novel about ELIZABETH BARRETT BROWNING is with my agent for reading. Soon I hope!

MARRYING MOZART: The dates for my talks for the Met Opera Guild are Tues. Nov. 13 and 20 from 6-7pm and the premiere dates of the opera based 0n the novel, produced by OperaModerne and Dicapo Opera, will be December 12th-16th 2012 at the beautiful intimate Dicapo Theater in New York City. I know who the writers are and the conductor and that they have auditioned fantastic singers. Very exciting!

NEW PROGRAM: My first talk in The World of Writing Novels, with powerpoint of my personal writer's world, will debut in October. I expect I will be doing this a lot. With all this and my continuing book talks on CLAUDE & CAMILLE, I am somehow living in three centuries and four countries at the same time...and I really cannot tell you if Victoria or Elizabeth I is Queen at the moment!

Are the World of Writing talks going to be in person somewhere or are they going to be online? If they are in person, where can I sign up?