<b>Guest Post: a novel in poetry about Shakespeare's theater days </b> 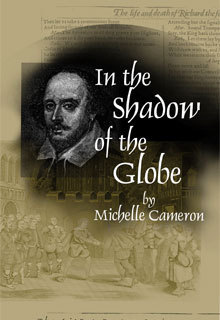 Michelle Cameron’s book In the Shadow of the Globe is exquisite and unusual – a historical novel told in poems centering around the real man Shakespeare in his journey from a struggling sensual playwright in London 1593 to a writer growing old. The poems, which are immediate and highly accessible, tell the story of Shakespeare’s acting fellows as well in this little theater world of the Globe which is now beyond famous. The main thread of the story are the poems from the point of view of Mary Burbage, a member of the great Burbage acting family, who watches and loves Shakespeare but can never tell him.

Michelle, what was the inspiration for this novel?

First of all, thanks, Stephanie, for letting me revisit my “labor of love!”

The inspiration actually came years before I envisioned In the Shadow of the Globe as a verse novel – back before Shakespeare in Love made Shakespeare popular again. I was watching a BBC special on Shakespeare’s Globe in my home in Jerusalem. I learned then that the actors would purchase the cast-off clothing of the nobility – because if a man played a king, he needed to dress as one. Something in me said, “there’s a novel in that,” and I decided to write one.

How did it find its form? Did you ever consider doing it in prose?

I did, in fact, write the book in prose first – as a young adult novel where my heroine is introduced to the Globe because she does sell her clothing to the actors. She then (naturally) has to dress as a boy because her life is in peril, and Samuel Gilbourne, one of the Globe apprentices helps her and, of course, falls in love with her.

The novel was actually accepted by a New York agent but he dragged his feet so much on submitting it to publishers that, discouraged, I ended up withdrawing it. I hadn’t yet acquired the perseverance you need to be published and I was distracted by the rest of my life – my young children, full-time job, scholar husband – and decided I simply wasn’t going to end up as the writer I thought I would.

But like many writers I know, I really didn’t have a choice – writing is more a calling than a career. Because of my limited time, I started writing poetry. Poetry is easy in short takes – you can write in the karate dojo waiting room or in the bleachers at the ball field and revise it in a handful of days or weeks.

I was inspired to turn the research I had done into a verse novel because I was fortunate enough to be mentored by Sondra Gash, a wonderful poet and writer, who was completing a poetic narrative called Silk Elegy, about her family. I bartered writing sessions by helping Sondra prepare her manuscript for submission – which became, in many ways, a kind of poetic apprenticeship. But what crystallized the idea of writing In the Shadow of the Globe as a verse novel was when I attended the Dodge Poetry Festival and heard Rita Dove reading from On the Bus with Rita Parks. It struck me that I too, had a subject I knew a great deal about – the life of Shakespeare and the troupe of Globe actors – and I decided to write a few poems about him. I think I wrote six poems that first day – they just flowed out of me.

Did you begin your literary life as a poet?

No, as an aspiring novelist. I wrote three novels early on that didn’t get published – thank goodness! (Even the young adult novel probably wasn’t good enough.)

But it’s a funny thing – after I wrote and promoted In the Shadow of the Globe, when I embarked on my next project (The Fruit of Her Hands), I tried very hard to write that book as a verse novel as well – because I thought that was now my genre. And it didn’t work. The material really needed to be developed as a historical novel. So I was pulled back to my original ambition, to be a novelist.

Regrettably, I find I can only write in one genre at a time – I’m not quite sure why. But I love poetry and I hope to return to writing it some day.

How did you research it?

You have to understand that the original research was done long before the Internet was available. I did a lot of my initial digging in the British Consulate library in Jerusalem – it is an exquisite Ottoman-styled building and I always loved rounding the metalwork spiral staircase and looking down at the black-and-white marbled tile on the ground floor. The library had a wonderful selection of books about Elizabethan England and Shakespeare.

My husband and I traveled to London and Stratford, and I had a glorious time soaking up the atmosphere. The new Globe had not yet been built , but we went to see the cornerstones of the building. I think my favorite moment of that trip was standing in Horseshoe Alley, where my first hero, Samuel Gilbourne lived – and realizing that he had actually stood on the same spot.

After we moved to the US, I worked at Radcliffe College and so, had the resources of Harvard’s Widener Library available to me. This included a copy of the famous Phillip Henslowe diary, which I used in both the original YA as well as In the Shadow of the Globe.

When I was, finally, working on In the Shadow of the Globe, the Internet had come into existence and I did use it to do some fact-checking as well as to find some interesting curse words and a list of the variations on the name Shakespeare, all of which were incorporated into the poems.

These poems are not only to be read but performed. Has this been performed and where? What did you think of the performance?

Yes, I’ve been incredibly lucky to have had the work performed in a variety of venues. One of the first was the Shakespeare Benefit for Broadway Cares/Equity Fights Aids at the Stella Adler Studio. If you’ll indulge me for a moment, I’ll copy and paste a passage I wrote about that performance:

The studio itself was very New York City — a bare, narrow space. It was packed to capacity with students and parents and friends of the actors: easily more than 200 people. People were standing in the back, sitting on the floor in front of the chairs that took over half the room.
A mass of young men and women come onstage — later, looking at the program, I see there are 28 of them. They find their spots, bow, and sit down onstage. The applause dies down, and a young woman stands up.

“Shakespeare…Seeks a Position,” she announces. Putting a hand to her chest, she adds, “Mary Burbage.”

And we were off. It was, in a word, amazing. Having these kids perform my work on a bare stage blew me away. They were phenomenal: funny, filled with pathos, angry, passionate, loving, argumentative, competitive. They had been extremely well trained and well directed, and the entire production was a delight. Each of the 28 got a “solo” so there were a dozen Mary Burbages, a dozen Shakespeares, three Anne Phillips, four Anne Hathaways, two Dark Lady's servants, a smattering of apprentices.

In addition, passages of the work have been read in staged readings – in the Shakespearean Garden at the College of Saint Elizabeth, at the Drew University Shakespeare Colloquium, by the Vintage Players of Connecticut and at the Winter Poetry & Prose Getaway at Cape May, to name a few. All wonderful, all bringing something just a little different to the approach and the performance. And it’s possible there will be another staged reading of the play this coming spring, at the West Caldwell Library.

Can you take seriously the creed that Shakespeare was not the author of his plays? Why do people suppose such a thing? And now we have this great movie Anonymous!

I think it’s fairly obvious from my work that I believe in the man from Stratford. I’ve encountered enough of the people who dismiss our Will as too uneducated, ignoble, and improbable to know that nothing is going to dissuade them from thinking that the “real” Shakespeare was Bacon, or the Earl of Oxford, or Kit Marlowe come back to life.

That’s okay – they aren’t going to dissuade me, either. I’ve seen enough evidence during my research that the conspiracy theorists seem lame. If we only consider the two men who tried to defame Shakespeare in print – the failed and dying playwright Robert Greene, who wrote that this “upstart crow” was “in his owne conceit the onely Shake-scene in a country” and the disaffected comic, William Kempe, who, in his Nine Daies Wonde, directed his final passage to “my notable Shakerags”― to realize that there had to be a reason for such vitriol. And that reason was William Shakespeare, who transcended his middle-class birth through his words.

Thanks, Stephanie, for letting us hear from Michelle Cameron. Michelle, if your readers don't know, in addition to being a brilliant novelist, is also a very charming person (We met and chatted over meals at a recent writing conference). Its very generous of you to share your "air space" as it were.

Michael, you're too kind! I'm delighted to have had this opportunity to revisit my novel in verse!