The Next Big Thing: Find Out What I'm Working On 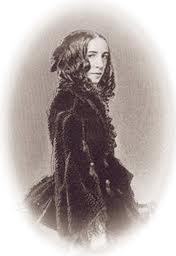 Elizabeth Barrett Browning about the time of her marriage
Writers are tagging writers in this new questionnaire going around the web. What's the next big thing we're working on? Thanks to historical novelist Christy English for tagging me!

What is your working title of your book?
ELIZABETH’S ROOM. I am sure we won’t end up with this title!

Where did the idea come from for the book?
I have always been drawn to the love story of Robert Browning and Elizabeth Barrett. I loved her Sonnets from the Portuguese which she wrote for him. About 50-75 years ago we had a movie based on her life which took them as far as the elopement, but the characters are much deeper and more complicated.

What genre does your book fall under?
It is so odd to say historical fiction now because that covers everything from the beginning of time to about 1950! A big stretch! I’ll say historical literary romance but it’s also about the discovery of a woman near 40 who finds love…what IS that category, pleased? A mid-life coming-of-age love story?

Which actors would you choose to play your characters in a movie rendition?
Maybe Jennifer Ehle as Elizabeth who was forty. Robert was six years younger but appeared very young at the time…so someone very handsome in his early 30’s. Lots of long wavy hair, impetuous! Who?

What is the one-sentence synopsis of your book?
The poet Elizabeth Barrett has lived as an invalid in her family home for several years when Robert Browning sweeps her away to Italy; but can they live happily with her laudanum addiction, no certain income, and her father who is determined to part them?

How long did it take you to write the first draft of your manuscript?
It’s really hard to say because I keep on rewriting. I’d say less than a year and it has been in revisions for about 2 years – frustrating, because I was so determined to get this book done quickly. I have had books which took less than a year but my last one took five years! The complicated thing is that we have thousands of letters from the Brownings; every time they sneezed, they wrote about it…and then in the first half of the book she does not leave her room. So it called for a lot of writing craft because you need drama in a novel; you need outward passion/action.

What other books would you compare this story to within your genre?
Perhaps my own last novel CLAUDE & CAMILLE, because it is a very passionate love story about people in the arts, the difficulty of living for an art and yet having a normal life.

Who or what inspired you to write this book?
I presented the idea to my agent/editor, fascinated by the historic love story; I had presented several ideas but they liked this one best. I read so many books on the characters and then had to put them away and imagine Robert and Elizabeth were living out their lives for the first time with no idea of the outcome.

What else about your book might pique the reader’s interest?
I think the second part: how they manage to bring back her health and get her out in the world and married is one part, but how do you deal reality after that? I think the fact is fascinating that she was struggling terribly with laudanum (an opium derivative which was prescribed as freely against pain and anxiety in 1845 as aspirin or tranquillizers are today) which nearly stopped her writing, her ability to bear a child and her relationship. It could have killed her. And then…she was not 22, she was forty and having the first great romance of her life. That happens to lots of people but there’s not enough written about it.

***
I am tagging a gifted group of novelists and warmly invite my readers to visit their sites. They are tagged on the top of the left column due to a problem with my software!


Message for tagged authors:
Rules of the Next Big Thing

***Use this format for your post
***Answer the ten questions about your current WIP (work in progress)
***Tag five other writers/bloggers and add their links so we can hop over and meet them.
Ten Interview Questions for the Next Big Thing:
What is your working title of your book?
Where did the idea come from for the book?
What genre does your book fall under?
Which actors would you choose to play your characters in a movie rendition?
What is the one-sentence synopsis of your book?
Will your book be self-published or represented by an agency?
How long did it take you to write the first draft of your manuscript?
What other books would you compare this story to within your genre?
Who or what inspired you to write this book?
What else about your book might pique the reader’s interest?
Include the link of who tagged you and this explanation for the people you have tagged.
Be sure to line up your five people in advance.