just a little bit of news of my daily life... 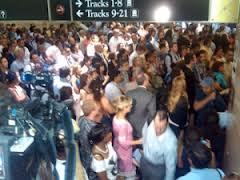 LIRR Penn Station NYC - I was going to Track 21 (see sign!)
I have been very slow to write here...a very full day and I always want to find another eight hours somewhere because I need them. I wrote in such a frenzy of creativity this morning that I could not bear to stop. Off to physical therapy for a small rotary cuff injury: too much intense writing! Unbelievably, two and a half years after CLAUDE & CAMILLE was published, people are still asking me to talk about it with the PowerPoint presentation of Monet's life and work which my husband designed. The people at the Gold Coast Library were so warm and welcoming, and one kind woman had made me two sandwiches because she thought I might be hungry going home. I was amazed. Feed the novelist!

Catching the train from the Long Island Railroad at Penn Station is always rather a brave endeavor; they never announce the train's platform until seven minutes before the train leaves when hundreds of people rush like sheep to the few stairways going down to the tracks, anxiety and determination in their eyes. And it wasn't even quite rush hour! Coming back from the library, there was such a mist about the trees and nearly deserted train platform that I felt I should really sketch a mystery novel as I rode back to the city, but instead of read some Italian and a bit about Queen Victoria on my Kindle.